In the office of the Mariposa DR Foundation, located on Calle 9 in the Callejón de la Loma in Cabarete, Dominican Republic, Orquidea Garcia is known by her alias:”Supermamá”. 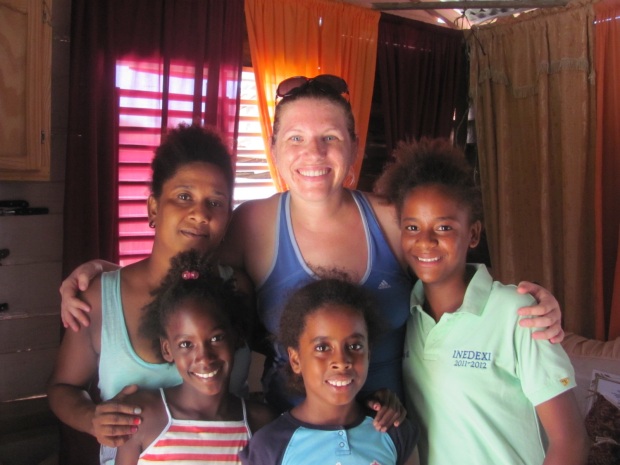 In 2010, when I first met Orquidea, she was very excited for her daughter, Orianna, to join the Mariposa DR Foundation’s First Ever Young Women’s Summer Leadership Program , an all-girls summer program that, in its first year, provided 50 at-risk teenage girls with four weeks of academics, activities, and excursions. When Orquidea agreed to join the program herself as a part of the School Staff Training Program, she took the first steps towards her new life as “Supermamá”.

Orquidea’s talents were immediately apparent in her abilities to use her quiet yet radiant personality to engage the Mariposa program’s young women in both casual conversation as well as in their academic work. I remember one day in early July of 2010, I walked into the library at Puerto Cabarete and saw Orquidea with a group of twenty or so girls. Not one of the girls turned towards myself or Mariposa Assistant Director Jessica Lawson when we entered the library. Orquidea had these young ladies completely enamored with a Spanish translation of Tomie di Paola’s Italian folktale Strega Nona. Afterwards, when I commented to Orquidea about her abilities as a librarian, she said: Jenny, tengo mucho ánimo. “Jenny, I have a lot of positive energy.”

Along with her neighbors and best friends, Claudia and Kathy, Orquidea continued to volunteer with the Mariposa DR Foundation, and in the fall of 2011, she was extremely excited when Executive Director Tricia Suriel arrived at her home along with Jessica Lawson to offer her a job working in the office of the foundation.

Today, Orquidea works full-time for the Mariposa DR Foundation, where she serves as the office manager. Each morning, she starts her day by chatting with the program’s young ladies as she prepares breakfast for them and then sends them off to school. Orquidea has gained many computer skills as well as learned English through her work in the office, and she handles e-mail and phone correspondence, arranging trips, appointments, and guest speakers.

Additionally, Orquidea tutors younger girls in mathematics, and she works closely with the girls in the health class alongside of clinical child psychologist Alexandra Milián Martinez. Although Orquidea admits that she worries frequently about the problems that these young ladies discuss in their groups, from typical trials of coming-of-age to more intense personal and family struggles, she loves being able to guide the young women of her community through their teen years and she is learning much from Martinez, her mentor.

Orquidea hopes to complete a degree in psychology at the local university in Puerto Plata, and she is currently taking the first steps towards making her dream a reality – Orquidea is completing her bachiller or high school diploma in evening classes at Puerto Cabarete, a local public school. Orquidea says that working with the Mariposa DR Foundation made her realize that she was actually very smart. Although she attended school through the 8th grade, she didn’t really think of herself as a serious student or learner until she began working with the young ladies in her community.

Between her roles as an office administrator, social work intern, student, and mathematics tutor, Orquidea remains a “Supermamá” to her beautiful daughter, Orianna, now age 13. Orianna graduated from the 8th grade in June, and she will begin classes at Colegio CADIN, a private preparatory school, in Islabón on Monday.

Orquidea is an inspiration to her friends, family, and students in the Cabarete community, and Literacy Change is proud to feature her as our very first Change Agent profile because Orquidea is making positive changes in education in her community, and she is a model of a teacher who is also a learner.