Throughout this school year, my husband and I, both musicians and former members of several Boston-based bands, had the honor of mentoring Alex La Rosa, an 18-year-old songwriter and guitarist, through the process of arranging and recording his debut album. Alex connected with us through my long-time friend Laura Fokkena, founder of Rise Out.

What is Rise Out?

Rise Out is a non-profit organization that provides a professional learning community for teenagers who do not attend high school but rather participate in home school or alternative independent study programs. Teens enroll in Rise Out on an annual basis, and each participant is expected to complete an independent study project.

My husband and I attended Rise Out’s end of the year celebration at the Boston Public Library at Copley two weekends ago, and Laura gave a wonderful introduction to the presentations, explaining that she does not believe that bullying or schooling toughens teenagers, but rather that students grow best when they are respected and listened to.

I personally found it incredible to see what these young people were able to do when given time, resources, and support to pursue their own independent projects, which included historical research, public health and fitness, technology, engineering, and the arts.  Below are a few highlights:

Although Matthew is only a junior in high school, he is already a collaborator with fellow scientists from Google, Massachusetts Institute of Technology and Draper Labs through his internship at Danger! Awesome, a “makerspace”, which Matthew explained is like an artists’ studio for the technologically inclined. For his Rise Out project, Matthew created a hovering robot that can self-navigate through a forest. Matthew explained how the Rise Out program has given him the connections and confidence “to be the person [he] always wanted to be”. Through Rise Out, Matthew had the confidence to pursue (and ultimately gain acceptance to) the VAST (Vermont Academy of Technology and Science) program at Vermont Tech, which will allow him to simultaneously complete his senior year of high school and his freshman year of college.

Matthew powers up his self-navigating drone at BPL – Copley

Kate’s project touched on two topics dear to my heart: public health and education. Kate’s project stemmed from her observations of  families at the Medford Farmers’ Market; she noticed that while parents shopped for vegetables, all of the kids ran to the cookie booth.

Already a reflective educator, Kate humorously addressed engagement of young children during her presentation: “When I asked kids if they wanted to learn about vegetables, I didn’t get a huge response, but when I asked, ‘Do you want to play with vegetables?’, kids started coming to my table.’ Kate was proud to announce her program’s sustainability, as the Medford Farmer’s Market plans to continue with Kate’s curricula and recipe booklet next season. 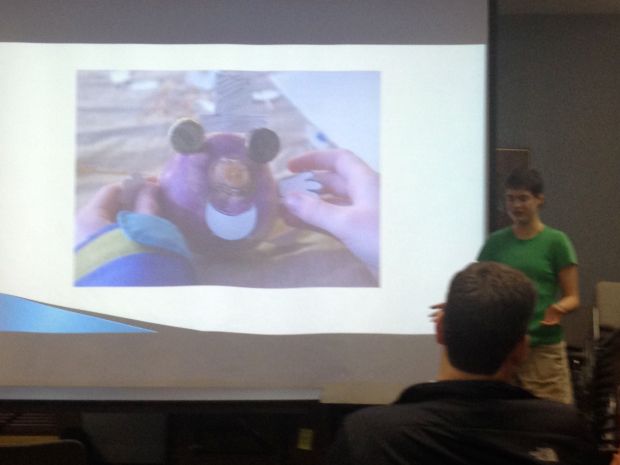 Kate shows a slide of a turnip face craft, just one of the activities she designed to connect children and vegetables at the Medford Farmers’ Market.

Alex La Rosa began playing guitar a little over a year ago, and he has already written hundred of songs. “But only sixty are set to music,” he explained, prior to the performance of “Don’t Believe Them”.  For Alex’s Rise Out project, he recorded his five song debut EP “Observing from Aphelion”. Alex will be attending Berklee College of Music’s Summer Songwriting Workshop in late June.

After viewing these presentations, I thought about my middle school students in Dorchester, and I felt incredibly inspired. What would my middle schoolers do, given time, support, and resources to pursue individual interests? I would love to create an independent research or independent study group, even as an after-school program, for my students at the Lilla G. Frederick Pilot Middle School. If we treat all children as gifted children, then all children will display their gifts. I truly appreciated working with Alex this year, and I’m sure we will be seeing more from the incredible young people involved in Rise Out in the years to come.