Author Mae Claire is as multi-faceted as the island of Hispaniola itself. A Haitian orphan, Mae was adopted by Christian missionaries and raised on the Dominican Republic’s North Coast. After attending college in the United States, she returned to the Dominican Republic to teach history and English at an international school. Mae has also become a mother to three adopted children, and, in 2012, she met her partner, Mary. So, is Mae Haitian? Dominican? American? Black? Polyglot? Mother? Lesbian? Christian? Atheist? One thing is certain – Mae Claire is not easily categorized.

Mae Clair has written several novels and memoirs, including Jogging to Hell, What Part of Me Is Saved?, and Larimar. Her books are available through her shop on lulu.com. In this exclusive interview, Mae discusses her 2010 young adult novel P.S. I’m Eleven: Surviving Haiti’s Quake. 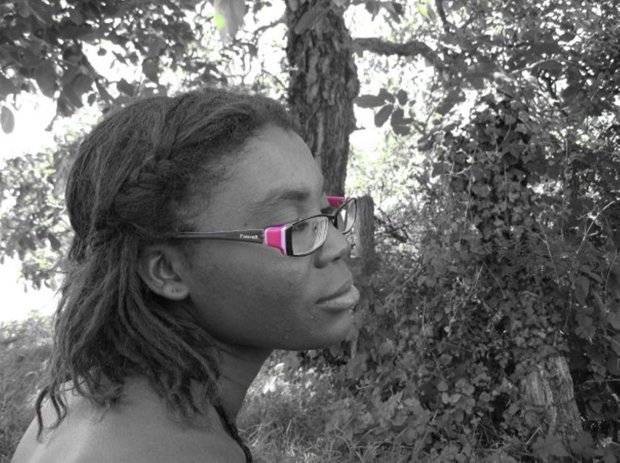 Mae Claire, A Novelist of the Caribbean

P.S. I’m Eleven is written in English, yet the narrative is certainly not an American style. Would you say the book is set up as a diary or does it follow a narrative pattern particular to the Caribbean?

This book is written in the form of a diary as I traveled to the border of Haiti and jotted down my observations. At some point in the book, when [the narrator] Antoinette is in school, she says that she is writing down everything that happens to her, and that one day she hopes to get it published.

Antoinette’s narration assumes that the reader is quite privileged for being in possession of a book. How do you see reading as a privilege? Do you think reading is a right?

It is miles and miles to get to a source of education for Antoinette and her best friend. The assumption is that if you have a book, you have the means to get it whether it being via car, bicycle, or horse. In Haiti, checking out books is not a familiar concept. People read the books in the building. I went to visit my oldest daughter in college in August, and I noticed that the facilities are wonderful. I stepped into the library, and it was huge, all air-conditioned and fancy with wireless internet, desks, and everything the kids could ever want. But books? They were behind the circulation desk and were rarely permitted out of the building. Books are sacred, and only privileged people get to read them.

So for [Antoinette], having a book means you are either privileged, or, the concept of book-keeping is quite different. I currently teach 4 year old underprivileged children. Every morning, my routine includes reading a book. My [students] are fascinated by them. [One of the students] does not have any books in her house. When she comes to [my tutoring center] though, she is surrounded by books. Books are also super expensive, and there is usually only one copy of each, so to lose them would be a tragedy. One book would cost about 800 pesos ($23.50 in U.S. Dollars). I sell P.S.I’m Eleven for about 450 pesos ($13.25 US)  and people don’t even dish out the money. 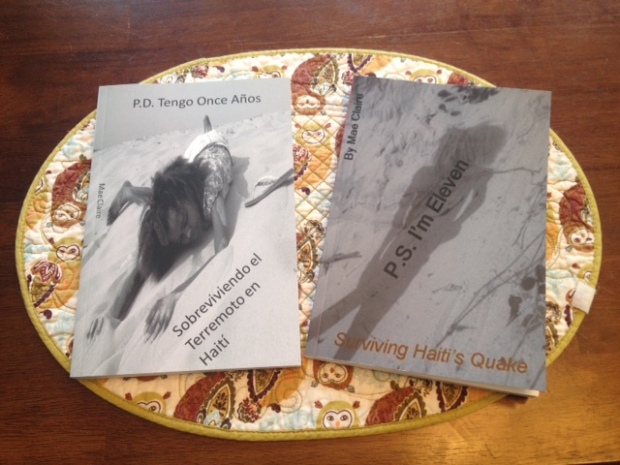 P.S. I’m Eleven – in Spanish and in English

The book is full of religious imagery – mostly Christian. However, when the Haitian women are burying dead from the earthquake, a polytheistic chanting ritual is performed. I have read that Catholicism is the more official religion of Hispaniola, but what other religious practices exist on the island? Are non-Catholic or Christian practices considered taboo? How do missionaries influence the religious practices of Hispaniola’s residents?

I think I have infused a lot of my personality and vision into Antoinette’s character, and this is where Christianity has become part of the imagery. I imagine myself in Antoinette’s position. If I had not been adopted at such a young age, I could see myself being her, being all of her.

Religious taboos are not really part of Haiti; if anything, the religions are a mix of everything and anything. They contact the gods, wherever the gods are, at any time, and in any situation. If the Christian God shows himself, then they talk to Him or Her. If the Buddhist God shows up, then that is who they work with. There seems to be little to no discrimination when it comes to their gods.

Missionaries have really created a discriminative perspective on spirituality as they claim that only Jesus can give you life to the fullest. But we know this not to be the truth, as there are many people groups and religious groups experiencing life to its fullest in a much larger spectrum. Missionaries have taught the people of the Hispanola to hate, judge, and discriminate against their own people. Christianity has not taught them to love one another unconditionally, but only to accept one another under certain conditions. Missionaries are the ivory of the ages. They offer food, drink, clothing, and health, and then open up their agenda book. They provide the physiological needs to later say “I told you so”.

What is your writing process like from the start of to the completion of a book? How do you plan your books? Do you have a writing routine?

My writing process has evolved greatly. As an English teacher, I use writers’ workshop to teach my students how to create a good plan, complete the first draft, work on the second, revise, then edit with a teacher, and then, finally create the publishable draft. But the more I think of that process, the more I realize that not everyone thinks in such a sequence. It is a good idea in theory, but not in life. For me, i always start with an idea, and i build my writing around that one idea. The book I am currently writing, Gracias A Dios, is based on people’s opinions about a God who helps some and not others. I am using my experience and that of other people to formulate and finally create the book. I used to begin by starting at the beginning. But now, like in P.S. I’m Eleven, I at times start at the end. Sometimes you need to know what happens at the end to be able to create a wonderful beginning, middle and refined end.

You seem very in tune with the mind of an eleven-year-old. The book’s narration seems extremely authentic as Antoinette has many understandings of the world, but she still seeks guidance from adults. How did you find Antoinette’s voice? Did anyone in particular inspire you to develop her character?

Before writing the book, I made a trip to Haiti’s border and spent time helping in a triage two days after the earthquake. I watched and listened and learned. I spoke with kids, around the age of 11. I then documented what i saw, felt, touched, and heard. I came home and then I worked with [cover model] Rocheyli in the summer. Rocheyli is part of the Mariposa Foundation. I spent time with her, at her house, with her family and got an idea of what she wanted in life. I found her character similar to my personality, and the character and voice I wanted for this narrative. I also considered this to be a book I wrote for my 6th grade students at the time. There was one student in particular who reminded me of Antoinette, and so I expounded on that. In short, three to five different kids influenced my writing and making of this character.

P.S. I’m Eleven addresses many topics that are normally taboo in young adult novels: perversion, menstruation, molestation, and lesbianism. Yet, these topics are extremely relevant to the lives of young people. Do you think it is an author’s responsibility to lift taboos? What prompted you to address these ideas through Antoinette’s character?

Taboo is a big word, especially when it comes to children and education. No one wants to step on people’s toes. But, I believe that taboos need to be lifted via pen and paper. If kids are reading it, parents can’t necessarily claim that a teacher has “said” this or “said” that. Alice Seabold’s Lovely Bones is a prime example of topics that are really poignant. My book was not openly welcome even in my school as the principal was afraid to answer questions if parents were to ask. But it is in their library, so kids can choose to pick it up if they please. These topics need to be discussed because children go through these things that are so relevant in their lives. In public schools, kids are dealing with all these topics and more. In private conservative homes, kids are dealing with these topics and more. So sometimes, if a child can read about it, and realize that the main character made it through, they may also acquire the hope that they too will survive. I wanted to address these ideas because i can’t leave them out. If I’m writing about Haiti and poor kids, then the need to include it –  it goes hand in hand. I want my book to encourage kids to ask questions. And hopefully, there is someone who can answer them.

How does the impact of the 2010 earthquake still affect Hispaniola today?
Kids are still homeless, parentless, motionless. No jobs, no money, more prostitution. More fear. Harder to adopt due to new rules, fewer buildings, but a new sense of hope, faith, love.