I was both surprised and thrilled when my colleague Susan Lovett sent out an e-mail about arranging a visit for author and activist Michael Patrick MacDonald. I jumped in right away to help organize this event for our school, the Lilla G. Frederick Pilot Middle School.

Years earlier, I had taken Mr.MacDonald’s book All Souls: A Family Story from Southie out of the library and read it cover to cover over the course of a single weekend. The book is a memoir of MacDonald’s early life in South Boston during the 1970’s and 1980’s, and the story that unfolds is much more than a personal narrative. All Souls offers a historical narrative with vivid first-hand descriptions of  Boston’s busing era and the influence of notorious criminal “Whitey” Bulger on the Southie neighborhood. The novel is also a spiritual journey of resistance and resilience on the part of young MacDonald, whose bright soul, curiousity, and dedication to his family and community shines through the trauma of living under the effects of poverty, crime, and death. The writing and publication of the book itself is a tribute to MacDonald’s bravery and activism, breaking the unwritten “code of silence” that long prevented the residents of the Southie neighborhood and others like it from reporting and discussing crime, drugs, and deaths plaguing their communities.

During Mr. MacDonald’s visit to our school on Tuesday, the acclaimed author spoke to a group of about fifty of our students, who were specially selected to attend the event based on their commitment to social justice and community leadership. Mr. MacDonald talked about the City of Boston’s Gun Buyback program, and he read a passage from his second novel Easter Rising which discussed the post-traumatic stress he experienced following the deaths of his brothers. The students had many questions to ask Mr. MacDonald, and he thoughtfully answered each and every one of them.

After the presentation, students received copies of All Souls (one young man even brought his own hardback from home) and had the opportunity to have their books signed. The students were overjoyed to talk with a real author, and I saw many students reading their books in the hallways while walking back to class. In fact, I taught a class right after Mr. MacDonald’s visit, and I had to ask students to put their new books away to focus on the lesson – this is the kind of focus issue that I am more than happy to see!

Students gather around MacDonald to have their books signed.

Two students from Academy 1 smile and show the cover of the book. 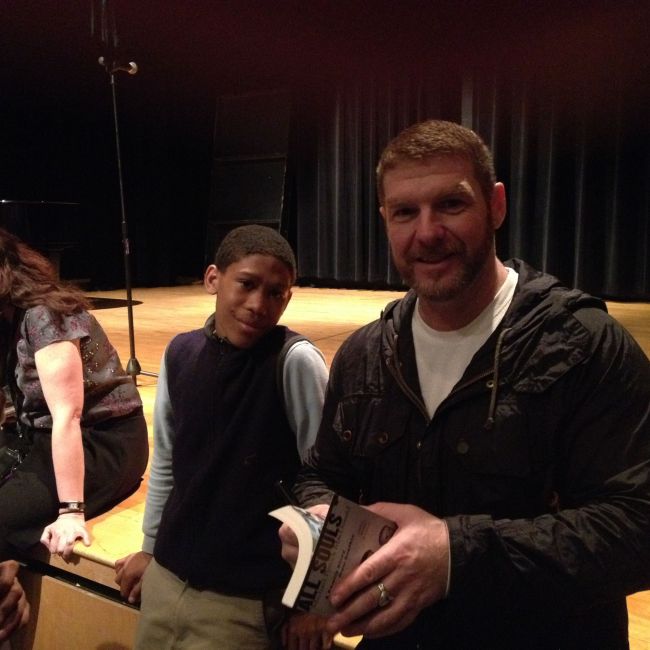 Sixth grade student Rasha shows his beautiful smile as he stands next to Mr. MacDonald.

Over the course of the week, many teachers reported to me that students were carrying the books in their backpacks and “showing off” the autographed books to students and teachers alike. My colleague Alice Laramore commented that the students were treating the books “like a trophy” of Mr. MacDonald’s visit.  I myself have ordered additional copies to use with my intermediate and advanced ESL classes in the last quarter of the year as part of a unit on argument and persuasion – at the conclusion of the unit, students will produce argument essays about how to best prevent violence in an urban community. Mr. MacDonald sent me some photographs of toy gun buyback programs to inspire our students to perhaps organize their own drive. The note I received from Mr. MacDonald read: Jennifer, please share these images from past buybacks and concurrent toy gun turn-ins organized by middle school aged kids, in case that might inspire some local community organizing in the school with the local community. These toy gun turn ins (in exchange for non violent toys and books donated by businesses like Toys R Us and Publishers like children’s lit Houghton Mifflin) are very fun.  And it’s a great way for teens, pre teens, and the smaller children to feel a sense of voice and agency. 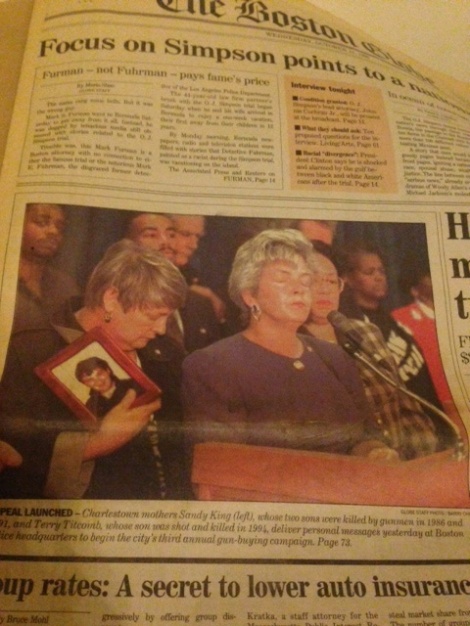 Mr. MacDonald with a young activist and organizer

Mr. MacDonald’s visit was a perfect fit for our school – our building itself is a symbol of triumph over violence, as our school was built by activists on a lot that was once a hub of criminal activity. Formerly named the New Boston Pilot School, the Lilla G. Frederick (LILL-LUH, not LYE-LUH) is itself named for a Grove Hall community organizer.