Now is the winter of our discontent

And all the clouds that lour’d upon our house

In the deep bosom of the ocean buried.
– Richard III
May has been a wonderful month for this bookworm to come out of hibernation. One habit I begun over the wintertime was solo dates with my daughters while maintaining my husband and I’s catch-as-catch-can solo dates. And the dates have improved along with the weather.
All of the dates involve city walking and public transportation – a writer’s dream and a form of relaxation.  I interact passively or directly with potentional characters in the setting of my Boston community. I capture snippets of dialogue while delighting in the rhythm of the city around me. My professional work as a Boston Public Schools teacher involves thousands of decisions and inserts me centrally in the lives of others, so bopping around town is a relief and a contrast. The decisions I make while out and about- to take Gloucester Street or Hereford, to write in a notebook or just hold hands with my husband or daughter – are inconsequential. 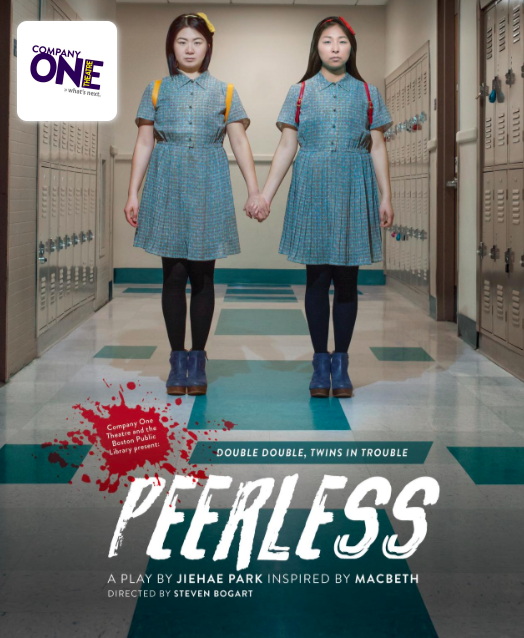 The other commonality that these dates share is that they are relatively inexpensive. A recent favorite date with my husband was a Pay-What-You-Want afternoon matinee of “peerless” by Jihae Park at the Boston Public Library’s beautifully renovated Rabb Hall. (Note: The Kiersten Business Library is  now located right alongside this hall. It has transformed from a dusty little room with cassettes of foreign language materials into an open study hall with alcoves, white boards, and comfortable couches and chairs). I absolutely loved this rendition of the Scottish play in which a pair of murderous twins plots to kill their classmates who have taken their coveted spots at the college. The sparse sets and the ruthless lack of empathy by the protagonists, paired with rhythmic dialogue, evoked the question: Why is so much value placed on the American Ivy League university? Admission comes at great cost – not only in a fiscal sense, but also in the cost of losing one’s identity in search of admittance to an elitist and exclusive, rather than democratic and inclusive, institution that values lineage and wealth over intellect and creativity? I had the chance to ask Ms. Park in post-show conversation about how to promote a new American ideal away from these preservation institutions, an ideal that values democratic principals and reflects the cultural diversity of young adults across our country. Her work increased my awareness of just how incredibly difficult it is for racial “minority” groups to obtain access to these presupposed American Institutions.  I found Ms. Park’s work to be radical and supportive of true democracy, and the Company One‘s pricing model enables Bostonians across class differences access to a professional (and provocative) theater production. Shows are still available tomorrow and next weekend.
A second wonderful date was today – I took my middle daughter (almost 3 and younger than her older twin by 14 minutes) to IAM Books, one of my most beloved Boston bookstores and the very first Italian-American bookstore in the country. There was a special I Piccoli Lettori (Little Readers’ Group) from 10:30 – 11:30 am. I am not Italian, but my daughters are the great-granddaughters of an Italian immigrant from Genoa who fled Mussolini at age 5 and came to San Francisco, attended an almost exclusively Chinese school, worked as a garbage collector, and eventually became a wealthy restauranteur. A pre-school teacher from Florence, Ms. Adele, conducted a small group of Italian and Italian-American families with young children in a song and then a reading of Il piccolissimo Bruco Maisazio who eats, among other comestibles, prugne, fragole, un lecca-lecca, gelato, and salsiccia.  And consequently, this piccolissimo becomes very fat. The children passed a piccolisimo to one another during the reading and then used glue and construction paper to create their own piccolisimo. I was touched when another family with a beautiful daughter invited us to Umberto, where we dined cheaply on arancini and pizza. Afterwards, I sat in the grass while Sofia ran back and forth on the Rose F. Kennedy Greenway.