Isn’t it unbelievable how relationships change over time? I was a difficult teenager and a distant twenty-something for my mom, but now she is one of my best friends. One thing I love about my mom is that she is up for anything – meaning that she will accompany me on whatever quirky little adventure.

So when I called my mom at 6:30 in the morning and asked if I should buy tickets for  The Greenwich Village Literary Pub Crawl for our NYC weekend, she (of course) said,”Sure!”

Mom and I Heart NY!

Although I don’t want to give any spoilers for those who may attend this tour in the future, I hope to give a glimpse into the three hours I spent in the Village on a sunny autumn afternoon.

Our tour began at the White Horse Tavern (est. 1880), where we convened with our tour guides (both very cool looking – a goth woman and a bearded guy with a newsboy hat) as well as a literary crew of tourists, mostly from New York State, all nerdy – just like us! 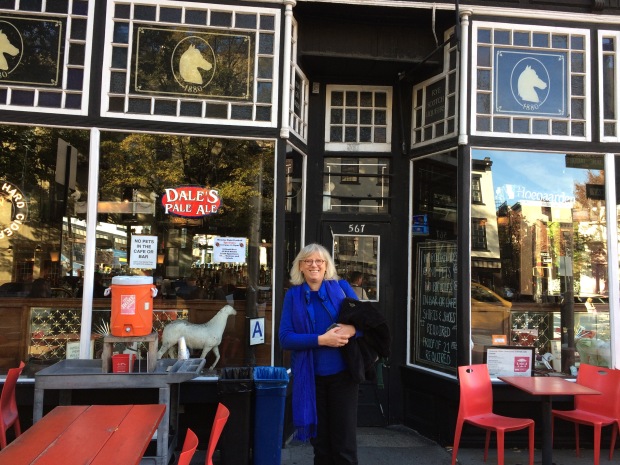 Mom outside the White Horse Tavern.

Welsh poet Dylan Thomas was the featured author at the White Horse, where he wrote his lilting yet highly emotional poetry…and literally drank himself to death. The White Horse is also the site of graffiti antagonizing belligerently drunk beat writer Jack Kerouac as well as a place frequented by one of my all-time favorites – James Baldwin.

Our crew then walked through the winding streets of the Village. Thank goodness for our guides – one can easily become lost here.  I find O’Henry’s description precise:

In a little district west of Washington Square the streets have run crazy and broken themselves into small strips called “places.” These “places” make strange angles and curves. One Street crosses itself a time or two.

Our next stop was the Kettle of Fish, a dive bar sectioned into two parts – the bar itself on one side and then a separate room with tables and chairs. Mom enjoyed a local beer (recommended by our guide), while I sipped a Guinness. I have never been a day drinker, and I worried about drowsiness, but our tour guides were so intriguing that it was not an issue at all.

Portrait of Kerouac outside the Kettle of Fish

One of the highlights of the tour (for me, at least) was seeing the guides act out a wussy fight between Andy Warhol and Bob Dylan over the Factory’s it-girl Edie Sedgwick. The truly violent storytelling emerges, however, as the guides tell of the severe beating of Jack Kerouac outside the bar after a long night of drinking. (Inference: Jack Kerouac was not a popular guy in these parts.) However, the Kettle does preserve Jack’s memory by housing the famous bar sign used in a well-recognized portrait, and later featured in a 1993 Gap Ad.

As we left the Kettle of Fish and made our way through the winding streets once more, we stopped outside the home of famed poet and openly bisexual woman Edna St. Vincent Millay, whose education and talent brought her from rural Maine to the Village in the early 20th century. Our goth tour guide impressively recited St. Vincent Millay’s poem “Thursday”  from memory.

After a brief stop outside of famed speakeasy Chumley’s, with it’s sliding window door, we arrived at Grove Court, the setting of O’Henry’s immensely touching short story The Last Leaf. Sample of this well-crafted narrative:

The most lonely thing in the world is a soul when it is preparing to go on its far journey.

Grove Court: The apartments in the back housed the bohemian characters in The Last Leaf.

Across the street was the home of the poet Hart Crane, a tragic figure estranged by his homosexuality and alcoholism. Despite these struggles, Crane, inspired by T.S. Eliot’s The Wasteland as well as his obsession with the Brooklyn Bridge, attempted an epic poem of the history of America, which was well-known but highly criticized. Crane’s life is truly sad and fascinating – I continue to research him when I can. 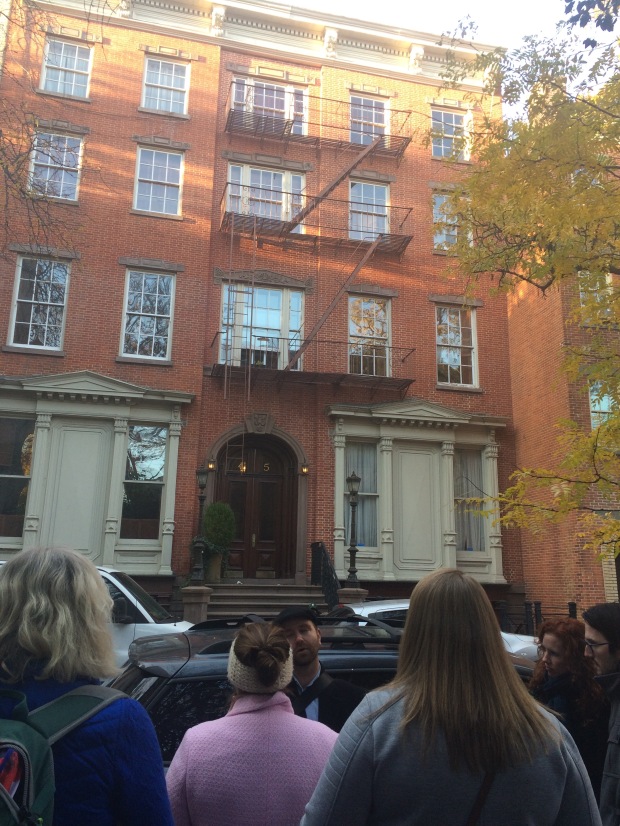 Our crew outside the home of Hart Crane. 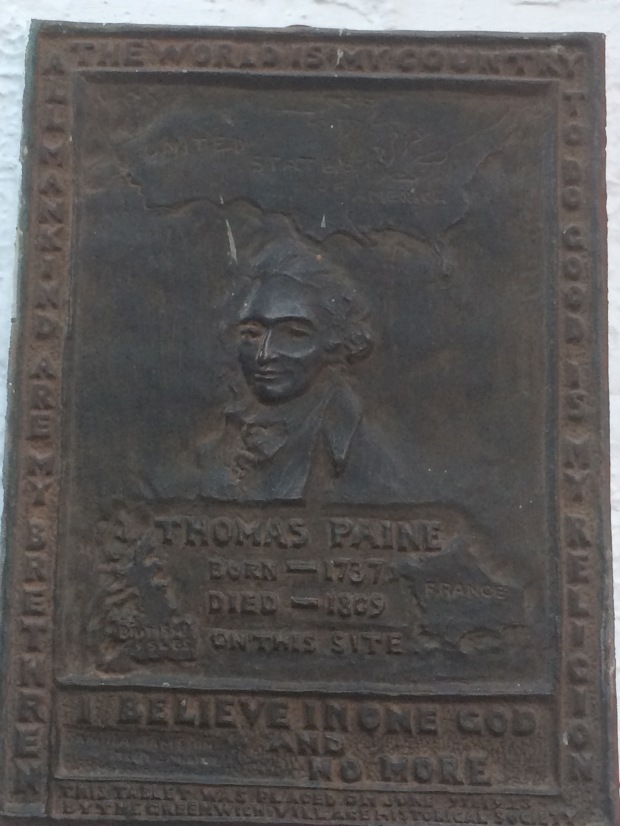 Our penultimate stop was Marie’s Crisis, site of the pauper’s death of Crisis papers writer Thomas Paine. A colorful moment at this location was when a woman with bright red lipstick (not a member of the crew) crept up behind Mom and I and proclaimed to the group:

Welcome to the Village! Where the streets aren’t straight, and neither are the people!

And, as quickly as the tour had began, it ended at The Stonewall Inn, considered the birthplace of the modern LGBT rights movement. In 1969, in an era when police routinely raided gay bars, the inn was the home of violent riots between the LGBT patrons and the police following the death of gay icon Judy Garland.

The Birthplace of the Modern LGBT Rights Movement

This tour made quite the impression on me. I have provided a mere snapshot here, as so much more information was presented by our knowledgable and enthusiastic guides. I was left with the following question:

How do writers persevere despite challenges related to trauma, alcoholism, and persecution for homosexuality and gender?

I have only recently began to identify myself as a writer (despite writing since childhood), and I face my own struggles with not only life’s challenges but also with making the mental and physical time and space to write. I haven’t yet found my community of writers, but on this tour, I felt at home. It was heartwarming and encouraging to spend an afternoon with a group of people as interested in writing and literature as I am (and to know that my mom is one of them!). This warm feeling had lingered within me ever since.

This post was written out of personal interest.  I paid my $20 (seriously a bargain) just like any other customer for this incredibly worthwhile tour! I highly recommend visiting The Greenwich Village Literary Pub Crawl’s Website for more information. The tour meets every Saturday at 1 pm at the White Horse Tavern (567 Hudson Street on 11th).